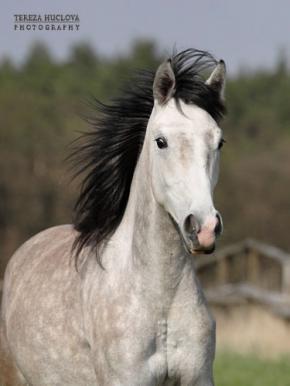 Safíja is the first foal I bred. She has the same constitution and nature as her parents. She was born about 3 week earlier but from the first foal steps she was inquisive, curious, dreadnought but also nice and sweet. All these attributes belong to her until these days. In addition to this she has a great willingness to fulfil the wishes.

Unfortunately, I decided to sell her when she was 2 years old despite the fact that she won the National Show in her class and she also became a Champion of Young Mares. After half a year from the sale I bought her back but she didn´t look as a Champion anymore. She was thin, without muscle and energy. I will not to do the same mistake in future. Next time I will be more careful with the choice of new owners. Safija was soon in a good condition and I´m sure that she is going to win some show awards. I cannot wait to see to start her working and get her under the sadle for the first time, I will be enjoying riding her.